I have a confession to make.

I came away from the SCBWI LA Summer conference with a brand new author crush. 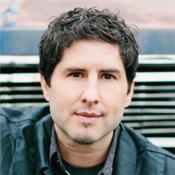 And not just because he is ruggedly handsome. Or because he took the time to notice where I was from when I was in line to get my book signed and then asked me where exactly Broken Arrow was. He even talked to me about an upcoming author event he had scheduled in my area. Very nice.

And it wasn’t because he said it was great to meet me. See?

Or because he took the time to stand up to take a picture with me. Not many authors do that. So thoughtful.

Or because he gave me a copy of his short story, Passing Each Other in Halls,  por nada. So awesome of him, wasn’t it?

Okay, okay. Ma-ybe he did that for all of his quasi-mental, yet adoring fans. Still, not all authors take this kind of time with their readers/stalkers/fans, believe me. Better than any fabulous swag I may have gained from the conference was the knowledge he imparted during his keynote speech and break out sessions. For that, I will be eternally grateful and a forever devoted reader.

During his break out session on exercising patience, one of the first things he said was:

The first page is important but don’t mistake this for EVERYTHING has to happen on the first page.

You don’t have to cram all the major drama – the break up, the car crash, the gun shot – in that first page to make your story great and to keep readers interested. Allow your characters to tell the story; let it unfold naturally. Sometimes you have to get out of your own way and let your readers come to their own conclusions.

Which brings me to de la Peña’s next nugget of wisdom:

Not every reader has to get every thing.

prejudice or narrator comment. The opening line is “Last night at 3:00am President Kennedy had been killed.” Within this passage, as the young soldier stalks through the jungle, there is a 2nd assassination with the death of a monkey, but the narrator doesn’t draw attention to it. If the reader gets the parallel, great. It adds another layer, a deeper connection to the story, but the reader doesn’t need to understand this connection to follow the plot.

De la Peña does the same with his own writing as well. In Ball Don’t Lie, a story about a foster kid who’s only constant in life is basketball, you don’t have to understand the game of basketball to appreciate it. In Mexican WhiteBoy, there are tons of Spanish passages that he doesn’t translate. You don’t have to know what’s being said to appreciate the story, but it enhances the experience. De la Peña says that when a kid who isn’t a big reader can translate a passage for a teacher who’s reading aloud to the class, he takes ownership of the story, which is what you want.

When reading a book, you are doing half the work; you take ownership of it. You picture the action in your mind.

When de la Peña returned to the discussion of how we as writers can show patience in our work, he talked about his experience in his MFA program. At one point, he was trying to show off, be a real stylist by throwing everything he’d learned into his current writing project. His advisor told him the story was suffering because of it. She told him to slow the f*ck down.

She was so right.

This advice has followed him throughout his career.

Sometimes the slow build is the best build.

When something big is about to happen in your story, slow that moment down. Car crashes, gun shots, even break ups can take seconds. You can slow it down in a book with many different strategies. Do you go with hypersensitivity? Backstory? Try different ways and see what works.

Sit there with the audience in the palm of your hand and make them suffer.

Ooh hoo hoo! Gives you chills doesn’t it? I’ve heard of hurting your characters, of torturing them until it hurts, but your reader? I’d never thought of their suffering while I write, have you?

But he does make an excellent point. Some of my favorite books have those delicious scenes that have kept me on that edge, prolonging the moment. It’s almost an agony, suffering the pain of the moment along with the character, but I find myself rereading these passages again and again, soaking up every bit, until I’m satisfied enough to move on.

If you are lucky enough to live in the Tulsa area, come see this dynamic author for yourself. Matt will be speaking on September 24th at the Martin Regional Library.