It’s been awhile since I’ve written about the Pride & Prejudice Bicentenary Challenge. The last time was my review of the Lizzie Bennet Diaries vlog series on Youtube. How much fun was that? I have really enjoyed the year-long bicentennial celebration of one of my favorite books, PRIDE AND PREJUDICE, by Jane Austen, and I loved discovering what a vast fandom her books have. So many works inspired by the fictional relationship between Elizabeth Bennet and Fitzwilliam Darcy, such an amazing achievement for an author! One could read nothing but these works if one so chose.

To end the year with a bang, and in the month of Austen’s birthday no less, I crammed in as much P & P action as I could. As the new year approached, I finished reading the original text and then watched two movie versions of the novel. Austen’s use of language to vividly portray such wonderful, flawed characters, was by far, my favorite part of this year-long celebration.

Speaking of characters, some of my favorite lines from the book involve the frequent discussions of character:

“Yes, but intricate characters are the most amusing. They have at least that advantage.” (Elizabeth Bennet to Mr. Bingley.)

Ah, such fantastic language, and oh, what a beautifully written heroine, don’t you think?

Watching the movies just let me revel in my favorite bits of the story, with some lovely eye-candy to boot. As many in the challenge have said, you always love your first P & P movie the best, and mine is the 2005 version with Kiera Knightley and Matthew McFadyen. Although I did enjoy the 1995 Colin Firth mini-series as well, (who doesn’t love that swimming scene, right?) I felt the emotional impact was stronger in the 2005 version. I mean, come on, Matthew Mcfadyen’s trembling hand after he helps Kiera Knightly in to the carriage? Who didn’t feel weak at the knees right then? 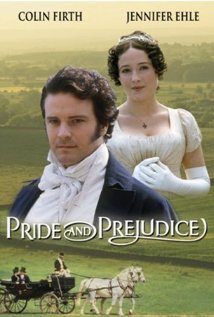 Have you been following this celebration? What are your favorite parts of Pride & Prejudice?