As I’ve mentioned, I’ve upped my reading goal to 80 books for this year. That’s a little insane since I’ve never met my reading goal. Ever. I did come close last time, so maybe I was feeling brave and a little drunk on new year’s resolutions the day I made that goal. Who knows?

I’ve made a sizable dent already by reading eleven books this month. Woohoo! That is a personal record. Maybe I wasn’t so crazy setting that goal.

Anyway, I am currently participating in three reading challenges (I picked up a Reading Bingo Challenge from a blog friend and fellow book lover) and I want to share my progress for this month, and some of the books I’ve read so far.

#RockMyTBR 2016 Reading Challenge I’ve tweeted my accomplishments, but haven’t taken advantage of the buddy reads idea, yet. I think I’ll try that next month.

The books from my TBR pile I’ve managed to clear off already are:

THE SKIN GAME (The Dresden Files #15) by Jim Butcher

Jim Butcher really knows how to layer a story with complex plots and how to keep you guessing to the very end. One thing I love more than anything is his use of humor. Even in the midst of the worst moments, his main character, Harry, can throw out a fantastic quip that has me rolling and also wondering if he isn’t just a bit insane. I absolutely love this series, and I am fascinated by the depth of characters and story lines that Butcher weaves into each one. The dynamic between Harry and his badass pint-sized sidekick Murphy is pure genius and she is also one of my favorite female characters in this genre – yep, the vanilla human with no magical powers who dares to fight monsters.

Butcher is the king of taking his characters so close to what they want and having it ripped away from them, just to be put through the worst possible scenarios while taking a hell of a beating as they try to survive by any means necessary. On occasion they don’t survive, which breaks our hearts even more. And yet, I still can’t stop reading each book at a break-neck pace. I’m already anticipating the release of PEACE TALKS (book #16) later this year.

Harry Dresden, Chicago’s only professional wizard, is about to have a very bad day….

Because as Winter Knight to the Queen of Air and Darkness, Harry never knows what the scheming Mab might want him to do. Usually, it’s something awful.

He doesn’t know the half of it….

It’s a smash-and-grab job to recover the literal Holy Grail from the vaults of the greatest treasure hoard in the supernatural world—which belongs to the one and only Hades, Lord of the freaking Underworld and generally unpleasant character. Worse, Dresden suspects that there is another game afoot that no one is talking about. And he’s dead certain that Nicodemus has no intention of allowing any of his crew to survive the experience. Especially Harry.

Dresden’s always been tricky, but he’s going to have to up his backstabbing game to survive this mess—assuming his own allies don’t end up killing him before his enemies get the chance…(Plot summary from author’s website.)

SIMON VS. THE HOMO SAPIENS AGENDA by Becky Abertalli

I was intrigued by the title and the cover and by all of the online love this book received by writers I respect. This debut novel was well worth the time. I really enjoyed the secret relationship Simon had with Blue and how honest he could be with someone he didn’t really know. The lengths he went through to protect this relationship from being harmed – what made this one more real than others in his life? Great concept and so well executed.

Sixteen-year-old and not-so-openly gay Simon Spier prefers to save his drama for the school musical. But when an email falls into the wrong hands, his secret is at risk of being thrust into the spotlight. Now Simon is actually being blackmailed: if he doesn’t play wingman for class clown Martin, his sexual identity will become everyone’s business. Worse, the privacy of Blue, the pen name of the boy he’s been emailing, will be compromised.

With some messy dynamics emerging in his once tight-knit group of friends, and his email correspondence with Blue growing more flirtatious every day, Simon’s junior year has suddenly gotten all kinds of complicated. Now, change-averse Simon has to find a way to step out of his comfort zone before he’s pushed out—without alienating his friends, compromising himself, or fumbling a shot at happiness with the most confusing, adorable guy he’s never met. (Plot summary from author’s website.)

What books are on your TBR pile?

2016 Book Riot Read Harder Challenge – I managed to read a couple off this list, too. Yay! I actually also read a book under 100 pages when I read through the entire SHATTER ME series, which included a couple of novellas, but I don’t want to count that towards this goal. There are some suggested readings in the discussions of the Book Riot’s Goodreads Read Harder Group that look more enticing. I love looking through the conversations here – so many great reading suggestions for each category! (You can also follow the Twitter hashtag #ReadHarder, if you’re curious.)

Books I’ve read for this challenge:

This is another beautifully written book by the master storyteller. If you haven’t read any of his books, I urge you gather them all up now, sit back and enjoy. And I envy you that first-time read of some truly amazing stories.

Schmidt crafts a wonderful and heartbreaking story that draws you in and makes you feel everything for Jack and Joseph and makes you want so much more for them.

I love it when I close a book with tears still fresh in my eyes. Ah! such a great story!

When Jack meets his new foster brother, he already knows three things about him:

He was incarcerated at a place called Stone Mountain.

He has a daughter. Her name is Jupiter. And he has never seen her.

What Jack doesn’t know, at first, is how desperate Joseph is to find his baby girl.

Or how urgently he, Jack, will want to help.

But the past can’t be shaken off. Even as new bonds form, old wounds reopen. The search for Jupiter demands more from Jack than he can imagine.

This tender, heartbreaking novel is Gary D. Schmidt at his best. (Plot summary from Goodreads.)

SHATTER ME by Tahereh Mafi

I was drawn to the cover and the description of a character who’s touch is deadly. I wanted to know her story. Then this series fit in with this challenge as my selection for the first book in a series by a person of color. Of course, once I read the first book, I couldn’t just stop; I read the entire series, including the two novellas told from the two main male characters, Warner and Adam.

Mari has such a unique writing style. She has a beautiful use of language that paints vivid emotional pictures, and really draws you in to her story. Her heroine, Juliette was fantastic. I loved following her struggle to self-discovery and finding her own inner strength. Such a wonderful series.

The last time she did, it was an accident, but The Reestablishment locked her up for murder. No one knows why Juliette’s touch is fatal. As long as she doesn’t hurt anyone else, no one really cares. The world is too busy crumbling to pieces to pay attention to a 17-year-old girl. Diseases are destroying the population, food is hard to find, birds don’t fly anymore, and the clouds are the wrong color.

The Reestablishment said their way was the only way to fix things, so they threw Juliette in a cell. Now so many people are dead that the survivors are whispering war– and The Reestablishment has changed its mind. Maybe Juliette is more than a tortured soul stuffed into a poisonous body. Maybe she’s exactly what they need right now.

Juliette has to make a choice:
BE A WEAPON. OR BE A WARRIOR. (Plot summary from author’s website.)

What books have taken you out of your normal reading pattern this year? 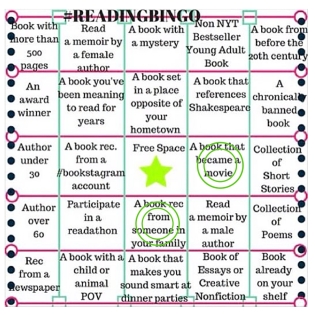 Books and Bowel Movements blog that I just love. Cassie is doing this reading challenge on her Instagram account, which makes fun and really easy. If you’re on Instagram, feel free to copy the picture and join in with the hashtag #readingbingo2016. It’s that simple. You can find me on Instagram at litbeing. You can find Cassie there at bookishcassie.

Books I’ve read for this challenge this month:

THE COLOR PURPLE by Alice Walker

(A book that became a movie)

This is a book I’ve been wanting to read for a long time. What finally made me pick it up was hearing how much the book impacted one particular reader. Author Matt de la Peña mentioned how influential this book was on him personally, and how surprised he was to see similarities in his life with that of Celie, the main character. Good enough recommendation for me.

I really enjoyed reading this book, and watching Celie discover her own inner strength and seeing her way to forgiveness over bitterness. Beautiful story.

Celie is a poor black woman whose letters tell the story of 20 years of her life, beginning at age 14 when she is being abused and raped by her father and attempting to protect her sister from the same fate, and continuing over the course of her marriage to “Mister,” a brutal man who terrorizes her. Celie eventually learns that her abusive husband has been keeping her sister’s letters from her and the rage she feels, combined with an example of love and independence provided by her close friend Shug, pushes her finally toward an awakening of her creative and loving self. (Plot summary from author’s website.)

WE WERE LIARS by E. Lockhart

(A book rec from someone in your family)

My daughter recommended this book to me. She rarely steers me wrong. This one was no exception. I love when a book surprises me and moves me. This one did both.

A beautiful and distinguished family.
A private island.
A brilliant, damaged girl; a passionate, political boy.
A group of four friends—the Liars—whose friendship turns destructive.
A revolution. An accident. A secret.
Lies upon lies.
True love.
The truth. (Plot summary from author’s website.)

Watch E. Lockhart read the opening of WE WERE LIARS here.

So what have you been reading, lately? What are you looking forward to reading next?