The first discussion of the Relaxed & Groovy Book Club begins! I’m really excited to have an excuse to talk about my favorite stories. I hope you’ll tell me whether or not you like the books we’ve read. (It’s really okay if you don’t!)

February’s discussion is a bit late due to scheduling conflicts and my life being totally chaotic at the moment, but I wanted to give my full attention to this rather than slap something up half-formed.

—Is it okay to hate a dead kid?

—Even if I loved him once?

—Even if he was my best friend?

—Is it okay to hate him for being dead?

Eighteen-year-old Vera’s spent her whole life secretly in love with her best friend, Charlie Kahn. And over the years she’s kept a lot of his secrets. Even after he betrayed her. Even after he ruined everything.

So when Charlie dies in dark circumstances, Vera knows a lot more than anyone—the kids at school, his family, or even the police. But will she emerge and clear his name? Does she even want to? (Plot summary from author’s website.)

King has become one of my must-read authors, and I am knocked out by each new novel she publishes. She is a master at using magical realism with astounding impact. This book is where it all began, and it won her a Michael L. Printz honor in 2011. She’s accumulated many more accolades since.

Let’s peek at the opening:

The pastor says something about how Charlie was a free spirit. He was and he wasn’t. He was free because on the inside he was tied up in knots. He lived hard because inside he was dying. Charlie made inner conflict looked delicious.

The pastor is saying something about Charlie’s vivacious and intense personality. I picture Charlie inside the white coffin, McDonald’s napkin in one hand, felt-tipped pen in the other, scribbling, “Tell that guy to kiss my white vivacious ass. He never met me.” I picture him crumpling the note and eating it. I picture him reaching for his Zippo lighter and setting it alight, right there in the box. I see the congregation, teary-eyed, suddenly distracted by the rising smoke seeping through the seams.

Dad doesn’t want me to see the burying part, but I make him walk to the cemetery with me, and he holds my hand for the first time since I was twelve. The pastor says something about how we return to the earth the way we came from the earth and I feel the grass under my feet grab my ankles and pull me down. I picture Charlie in his coffin, nodding, certain that the Great Hunter meant for everything to unfold as it has. I picture him laughing in there as the winch lowers him into the hole. I hear him saying, “Hey, Veer -it’s not every day you get lowered into a hole by a guy with a wart on his nose, right?” I look at the guy manning the winch. I look at the grass gripping my feet. I hear a handful of dirt hit the hollow-sounding coffin, and I bury my face in Dad’s side and cry quietly. I still can’t really believe Charlie’s dead.

I already love Vera after this first page, and know that I’m going to be utterly moved by this book before we go any further.

The Questions and Possibly Some Answers:

I love that A.S. King invited us to see the story from several different perspectives, different viewpoints, especially from Vera’s dad. How unusual to read a candid, flawed adult POV in a YA book.

What was the purpose of showing us the world through the eyes of Ken Dietz? What about Charlie, after he was dead? Or the Pagoda?

Ken Dietz talks about how he had no father figure to teach him to be a father and how he is an alcoholic and how he wants Vera to have self-esteem to avoid this same horrible destiny – complete with flow charts.

From Dead Charlie, we learn about his motivations while he was alive, and how he really felt.

From the Pagoda, we learn that this town monument was meant to be something grand when it was first built, but it never came to pass. It may be a symbolic place for some, but it is now a “sleazy spot to get laid”. No matter what people want it to be, the Pagoda sees what is.

“I nearly burned down in 1969. But they keep saving me because they know I stand for something. They’re just not sure what yet.”

What goes wrong with Charlie and Vera’s relationship? Do you think it was doomed from the start?

Why does Vera drink? Is she simply coping as she claims or is it something more?

When her dad first discovers that she’s been drinking, his reaction is to make her call her mother whom she hasn’t seen or talked to in six years. He later makes her read a pamphlet on teen drinking. She comments to herself that:

The culture of ignoring is so prevalent in this story, where does it come from? Why is it dangerous?

Vera’s parents ignore the abuse happening next door at Charlie’s house, and then when Vera dares to ask about Mrs. Kahn, her dad tells her to ignore it. Vera talks about how the older people get, the more shit they ignore. Or they pay attention to stuff that distracts them from the more important things that they’re ignoring. She admits that she ignores plenty of stuff, but says,

“There’s something about telling other people what to ignore that just doesn’t work for me.”

She talks about all the different types of bullying she observes throughout her day and how everyone ignores it or is told to mind their own business.

“I’m sorry, but I don’t get it. If we’re supposed to ignore everything that’s wrong with our lives, then I can’t see how we’ll ever make things right.”

After hearing her thoughts on this, how do you come to terms with her own decision to want everyone to ignore her? Is it just because she wants to slip quietly through high school without being found out to be an ex-stripper’s daughter or is there more to this?

What do you think of the signs of Charlie that Vera experiences? From the grape jumping off of her wrap to the talking pickles to the full-on hallucinations of the 1000 Charlies; what purpose do you think these events serve?

Is this Charlie himself pointing Vera to clues or is this the manifestation of Vera’s guilt for not coming forward to clear Charlie’s name? Or is this simply Vera trying to come to terms with what happened to him?

At first, it may be hard to understand why Vera doesn’t go straight to the police and tell what she knows. But then, she talks about seeing Charlie everywhere, and we get a better sense of how much she’s grieving and maybe not really coping. The more he nags her with the 1000 Charlies, the more she hates him for leaving her with this mess:

“Or for leaving me, period.”

What are your thoughts on the book? Did the ending satisfy you?

I could talk about this book forever! I hope you enjoyed reading it and go on to

read all of A.S. King’s books. She has a new one coming out this fall, STILL LIFE WITH TORNADO, and the cover was just revealed last week! Looks amazing! 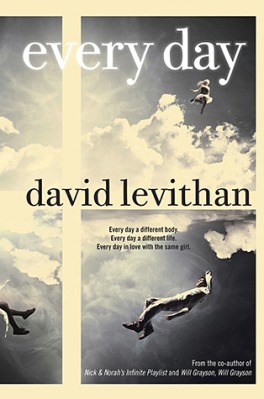 EVERY DAY by David Levithan

In his New York Times bestselling novel, David Levithan introduces readers to what Entertainment Weekly calls a “wise, wildly unique” love story about A, a teen who wakes up every morning in a different body, living a different life.

There’s never any warning about where it will be or who it will be. A has made peace with that, even established guidelines by which to live: Never get too attached. Avoid being noticed. Do not interfere. It’s all fine until the morning that A wakes up in the body of Justin and meets Justin’s girlfriend, Rhiannon. From that moment, the rules by which A has been living no longer apply. Because finally A has found someone he wants to be with—day in, day out, day after day.

With his new novel, David Levithan, bestselling co-author of Will Grayson, Will Grayson, and Nick and Norah’s Infinite Playlist, has pushed himself to new creative heights. He has written a captivating story that will fascinate readers as they begin to comprehend the complexities of life and love in A’s world, as A and Rhiannon seek to discover if you can truly love someone who is destined to change every day. (From author’s website.)

I cannot tell you how much I love this book. I wish I could put a copy in every single person’s hand and watch them read it.

David Levithan is amazingly talented and one of the funniest writers ever – when he isn’t smashing your heart into a thousand pieces. I do hope you’ll read this one and join us! The next meeting of this most relaxed and groovy of book clubs will be the last week of March. (Tie-dyed tees and funky shoes optional.)