As an author, I love supporting independent bookstores. Just a few short years ago, there was quite a drought of indies here in the Tulsa area, and now I am happy to say quite the opposite is true! 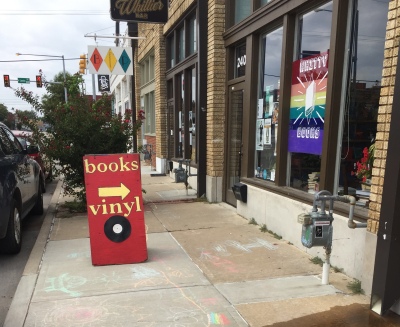 I want to introduce you to one of the newest indies in our area, Whitty Books. This little jewel opened its doors in July, 2018, in the Kendall Whittier District – just around the corner from the nonprofit Circle Cinema theatre. 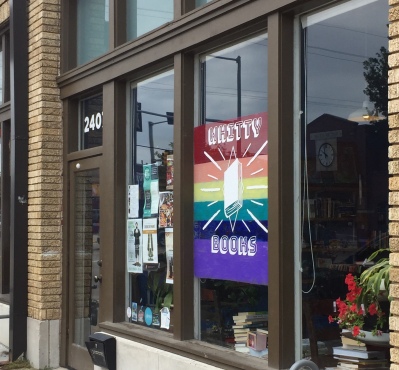 I had the pleasure of meeting one of the owners, Victoria, when I attended the double book launch for fellow SCBWI OK author Traci Sorell. She said after a year of being open, she really has a feel for her customers and what they want. THAT’S one thing I love about an independent book store!

I loved all of the artwork on the walls in the store and the friendly atmosphere. Books titles were easy to browse on the shelves – nothing felt overcrowded or uncomfortable. Victoria was approachable and friendly.

They have several book clubs at Whitty Books, and Victoria actually invited us to attend one the very next day, for a book by Joy Harjo – our current Poet Laureate, who just so happens is from Oklahoma. ( I do love her writing! If you haven’t checked her out, she’s amazing.)

The book clubs are held at the store – about one a week – all with categories like Sci Fi/Fantasy, True Crime, Native American Lit, Truth and Reconciliation, and Women in Horror. Visit their Facebook page to see what’s on the calendar this month.

The next time you’re thinking about buying a book, BUY LOCAL! And why not stop in and check out Whitty Books? Tell Victoria I sent you! 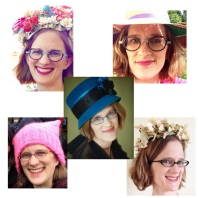 I received this book from the beguiling Laura Stanfill. Not only is she a champion for independent books in her home state of Oregon, she’s the founder and publisher of her own independent publishing house, Forest Avenue Press, and she can wear a fancy hat like no one else I know.

I met her through our mutual love of books and blogs a few years ago, and I was lucky enough to read the very first book her house released. She’s been on a roll ever since. She thought I might enjoy this latest story and sent me a copy. So thoughtful!

Froelich nurses a decades-old family grudge from his permanent perch atop a giant ladder in this nineteenth century madcap adventure novel. When he disappears suddenly, his nephew embarks on a rain-soaked adventure across the Pacific Northwest landscape to find him, accompanied by an ornery girl with a most unfortunate name. In their encounters with Confederate assassins, European expatriates, and a general store magnate, this fairytale twist on the American dream explores the conflicts between loyalty and ambition and our need for human connection, even at the highest rungs. (Plot summary from publisher’s website.)

This is such a unique and wonderful tale, a truly magical romp of a story. Although I found it hard to readily describe – it’s kind of a folk tale with tall tale leanings filled with the most fascinating cast of characters – I did thoroughly enjoy reading it.

Here’s an excerpt from the beginning:

The brothers’ land (two plots arranged end-to-end) was adjacent to Boxboro – less of a town at the time than the notion of a town. The previous year, the United States Congress had passed the Donation Land Act. Harald and Froehlich, being of voting age and white (by accident of birth, and without conscious design), were entitled to three hundred twenty acres in Oregon Country, provided they make improvements to the land and remain for four years. At nineteen and eighteen years old, respectively, they received no greeting when they arrived, nor did anything but a handwritten mile marker signify their property.

“A bog,” Forehlich noisily observed. “It reminds me of a bog, Harald, only without the charm. In California, at least it’s sunny. At least the people were civilized! Did you see that coot at the general store? His mouth looked like the back of your knee! Is it any wonder they’re giving away land? If a person were to come up to you and say, ‘Here, take my daughter – my pride and joy, a vision to see,’ would you think to yourself, ‘Oh, lucky day!’ Or would you think, ‘Let me see this daughter of yours.’ Maybe it’s not even his daughter, Harald, but a man dressed as a woman, lying in wait! And when I pay her a visit, with my chin shaved and my hair nicely parted, he jumps out from behind the wardrobe, strikes me over the head, and-“

“Enough, Froehlich!” Harald shouted, finally compelled to open his eyes. Staring down at his brother, he asked, “What are you trying to say?”

“What am I trying to say?” The volume of Froehlich’s voice was enough to startle the birds. “I’m saying it’s abysmal here! I’m saying this has been a terrible mistake! No one should suffer such indignity, unless they’re being punished for a grave sin-which to my knowledge, I am not.”

“But I like it here,” Harald said. “I enjoy this weather.”

“Don’t be ridiculous,” Froehlich snapped. “Go live at the bottom of a well, if that’s your preference. I say California was superior in every way. Or New Orleans – I rather liked the Port of New Orleans. Let’s go back.”

This statement caused Harald’s jaw to swing open, as if on a great hinge. For a moment he was rendered speechless, his face all but frozen, except for a distressed vein that pulsed in his temple. Finally, when it appeared he might’ve been struck dumb, he offered a smile.

“Walk all the way to the Fort Astoria? And how will you, with your feet in that condition?”

Froehlich folded his arms and scowled. He’d thought his limp was less noticeable, even as it had grown more and more pronounced. He felt it was cruel for Harald to make light of his affliction. After all, his brother stood head and shoulders above normal men and was strong as a locomotive.

“You’ll have to carry me, of course,” Froehlich said.

Harald threw his head back as his laughter turned to howls. The rain dappled his forehead and ran in rivulets down his cheeks.

“Carry you?” he gasped, when he was finally able to speak.

Froehlich, who was beginning to lose his patience, confirmed, “Yes – carry me. Don’t pretend for a second that I’m too heavy.”

“Of course you’re not too heavy – I could put a wagon on my back. But why carry you? Why should I leave? This is my home, now, Froehlich. The contract requires that we stay for four years.”

Now it was Froehlich’s turn to gape. The betrayal he felt stemmed less from what Harald wanted, and more from what he didn’t want. Harald, with his unique physical gifts, could’ve made a name for himself in Deutschland, when no such option had been available to Froehlich. His only chance at upward mobility had been to pursue his fortune, and that pursuit had led him to this wilderness.

“Come with me,” Froehlich said. “I want to show you something.”

Technically, they were standing on Froehlich’s land. Slogging to the middle of an empty pasture, where the drizzle had turned the ground to slurry, he spun around to face his brother.

“There,” Froehlich said, pointing at his feet. Rain was dripping down his brow and under his collar, not that he noticed anymore. “Look right there, and tell me what you see.”

“It’s your grave,” Froehlich sneered. “Yours and mine, both – but you first, if rank stupidity has anything to do with it. We’ve traveled tens of thousands miles, Harald, and for what? The privilege of drowning while standing up? If that’s the case, I’d rather spend what time remains alone. Oregon Country is big enough that I don’t have to see your idiot face.”

Hobbling toward the wall of the trees, he paused to correct himself. “My home,” he said. “My land. You go and live someplace else.”

Things only get more unpleasant between the two brothers when a love-interest come into play leading to a full-on feud of ridiculous proportions until Froehlich banishes himself up a ladder, the fourth largest in the land, and refuses to come down. For years.

But don’t let the whimsical side of this story fool you. There is a darker, more haunting side explored as well. Almost all the characters suffer from one form of alienation or another and all struggle to find their place in this new world – longing for a sense of connection. Many of these struggles felt very relevant to today.

I really enjoyed the wild ride this story led me on. I think you will, too.

Error: Twitter did not respond. Please wait a few minutes and refresh this page.

A Writer and His Reading

On publishing, clients, writing, and queries