I first met Sonia Gensler at a SCBWI LA Summer Conference dinner for all the people attending from our state. It was a banner year for Oklahoma with more than ten people crowded around the table. I had the good fortune of sitting near Sonia and her husband. I remember having a delightful time getting to know the two of them. At one point, there may or may not have been a discussion about the extreme hotness of Edward Norton in The Illusionist and a few other notable sexy nerd-types. Thus, a writer friendship nicely cemented, we saw each other over the years at local conferences. Soon Sonia was a guest speaker at our own SCBWI Oklahoma Fall conference with the exciting announcement of her first two-book deal. We were all so excited for her.

Sonia is a lovely writer who embraces things on the eerie end of the literary spectrum. Gothic architecture, haunted pasts, dead bodies, and restless spirits. You’ll find it all in her first dark mystery, The Revenant, set in a Cherokee Female Seminary in Indian Territory. The rich setting and fully developed, fabulously flawed characters were easy to fall in love with. As for the spooky elements, I did indeed get goosebumps. It reminded me of reading Agatha Christie novels as a young girl, under the covers, way past lights out because I had to know how the mystery ended.

Sonia’s latest book, The Dark Between, set in Cambridge, England, shows just as much promise for a delightfully spine-tingling read. And I just love the cover. 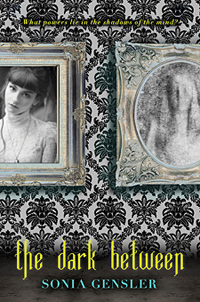 Kate is a schemer,
Asher is a skeptic,
Elsie is a dreamer . . . who can speak with the dead.

At the turn of the twentieth century, Spiritualism and séances are all the rage—even in the scholarly town of Cambridge, England. While mediums dupe the grief-stricken, a group of local fringe scientists seeks to bridge the gap to the spirit world by investigating the dark corners of the human mind.

Each running from a shadowed past, Kate, Asher, and Elsie take refuge within the walls of Summerfield College. But their peace is soon shattered by the discovery of a dead body nearby. Is this the work of a flesh-and-blood villain, or is something otherworldly at play? This unlikely trio must illuminate what the scientists have not, and open a window to secrets taken to the grave—or risk joining the spirit world themselves.

The Dark Between, a supernatural romance about the powers that lie in the shadows of the mind, is perfect for fans of Sarah Rees Brennan, Alyxandra Harvey, and Libba Bray. (Plot summary from Sonia’s website.)

Following the success of her first book and on the eve of her second book’s release, I asked Sonia if she’d spare some time away from her hectic schedule (and from summering overseas in England – so jealous!) for an interview. Gracious as always, she agreed.

Valerie Lawson: Tell us about your latest book, The Dark Between, what inspired this story?

Sonia Gensler: The Dark Between is a paranormal murder mystery set in 1901 Cambridge, England. I was first inspired to write the story when I was researching The Revenant and happened across Ghost Hunters: William James and the Search for Scientific Proof of Life after Death, an engaging look at a group of 19th century scholars and scientists who investigated paranormal phenomena. I found these men and women fascinating, but couldn’t help wondering what their teenaged children might have thought of it all. So I wrote a story about that!

VL: That does sound right up your alley. And I can only assume your delightful summer surroundings inspired the setting. England always seems a bit spookier to me. Great choice.

You just filmed the book trailer for The Dark Between right there in Cambridge, how was that experience?

SG: Stressful! Time-consuming. The actual trailer for the book is a 1 minute intro with text and images — that’s pretty much finished and I’m quite happy with it. What we filmed was a “behind the scenes” look at the town and university, and we were fortunate to have a Cambridge student helping us with historical context and the local perspective. At this point, it’s a matter of cutting all the material down. So difficult.

VL: Excellent! I can’t wait to see the finished trailer.

We have to talk about your affinity for watching television, how are you handling the withdrawal while across the pond?

SG: Strangely enough, we don’t have time to watch much TV, though we do see plays and concerts while we’re here. We’ve watched a few BBC shows on my computer. (The White Queen is entertaining — it comes to the US on STARZ soon.)

What did you want to be when you were in grade school? What influenced this choice?

SG: I’m pretty sure I wanted to work with animals. I was fascinated by Jane Goodall and Dian Fossey, who worked with chimpanzees and gorillas respectively. In grade school I probably would have said I wanted to go into primatology or zoology. My, how things change!

VL:  That is surprising. I wouldn’t have guessed chimps. Maybe a cat wrangler.

When did you know you wanted to be a writer/or to pursue the career you chose? When did you start pursuing that seriously?

SG: My high school students truly were the ones who inspired me to pursue a career in writing. Some of them were so committed and fearless that they challenged me to up my game. I finished my first novel (the one that will forever hide in a drawer) while I was teaching. Soon after that my husband encouraged me to take a year or two off to see if I could actually get something published. From the time I finished that first story to the publication of my first novel was probably about 5 years.

VL: That is so great! I love that your students inspired you. I can only imagine how inspiring you must be to them now.

Were you ever afraid of the dark, of anything under your bed or in your closet?

SG: I was ALWAYS afraid of the dark, and I was quite certain that scary things lurked under the bed or in the closet. I lost a lot of sleep over this and at times got so scared that I curled up under the covers at the foot of the bed in hopes that any monsters would think the bed was unmade and empty. The next morning my mom would lift the covers and find me drenched in sweat and gasping for air. She thought I was weird, but I preferred to smother under the covers rather than be eaten by a monster.

VL: I can definitely see where a seed may have been planted for stories to grow.

What are you currently working on?

SG: Right now I’m working on a middle grade contemporary story in which a group of kids are filming a ghost movie. It’s been a pleasure to take a break from historicals and to write for younger readers.

VL: A new writing challenge. Nice. Way to keep upping the game for yourself.

What has been your favorite book to read/book you’ve been most excited about over the past year?

SG: Splendours and Glooms by Laura Amy Schlitz was the perfect book for me — I loved the Victorian Gothic setting, the magic and mystery of the plot, and most of all, the unique and sympathetic characters. It was such a joy to read!

VL: Thank you so much, Sonia, for sharing your time with us here, today. Enjoy the rest of your English summer and good luck with your book release! I, for one, can’t wait.

The Dark Between, arrives on August 27th. Preorder your copy, today!

A Place of Books & Thoughts